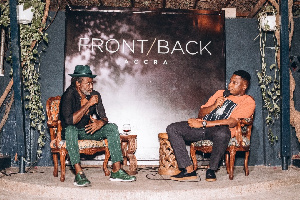 On Wednesday, 29th September, Antoine Mensah hosted Reggie Rockstone at the Front/Back Living Room session. It’s an intimate interview session where artists get to share their music journey and interact with fans over music and drinks.

The two had a stimulating conversation on Reggie’s music career, being a businessman and current music trends right before Reggie was presented with a signature drink named after him: The Rockstone.

These are the takeaways from the conversation:

1. On the need for artists to show some form of unity

Reggie said unity has been within the industry for long. It is the insurgence of social media that has got people thinking that there was no love amongst the artists. He shared experiences of jamming in Kumasi with Lord Kenya and revealed that at a time when he was very broke, Obrafuor came to see him with an envelope of cash.

2. On his relationship with M3NSA and the making of ‘Ah’ featuring KK Fosu

Reggie and M3NSA have known each other for years and Reggie was some sort of mentor to M3NSA. According to him, he learned a lot from the young artist at the time and shared the role he played on his hit song ‘Ah’ featuring KK Fosu. Apparently, M3NSA was the producer behind that song and was about 16 at the time, telling him he had a hit song on his hands and a young singer from Dansoman (KK Fosu) will kill it. He was right. M3NSA also produced most of the songs on Reggie’s ‘’The Last Show’’ album.

3. On Afrobeat and Hiplife

Reggie talked about the link between Afrobeat and Hiplife. According to him. They are deeply intertwined. He explained that Hiplife is deeply rooted in Afrobeat because way before it became the ‘’cool thing’’, he, Reggie was already sampling songs from the founder of Afrobeat, Fela Kuti. He sampled Fela’s Shakara on his biggest song ‘3y3 Mo D3 Anaa’… Hiplife and Afrobeat have always overlapped.

4. Weighing in on the Ghana Naija music debate

Reggie basically asked Ghanaians to calm down and stop underestimating their influence in music. He explained that Nigerians and Ghanaians have been ‘’brothers’’ since time and Nigerians always make it a point to credit Ghana for constantly inspiring their sound. Both countries benefit from each other in different ways.

Reggie Rockstone called himself someone who refuses to grow old. He talked about exploring different things including TikTok and being updated with the times. He makes it a point to always know what’s ‘’hip’’ and finds a way to seamlessly insert himself.

Reggie said he will be dropping new music on 7th October. He called it not just any music but ‘’music with a purpose’’. Reggie may retire for real… or not. He moves with what inspires him and prides himself in knowing that he has a special eye for talented artistes and can tell who has star power with an exciting future in the industry.