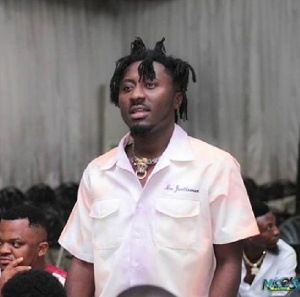 Ghanaian rapper Amerado has said the decision to pursue rap music has been challenging though he is gradually fitting into the music industry.

According to the rap sensation known in real life as Derrick Sarfo Kantanka, many talented rappers have fallen along the line due to their inability to change their styles to fit into the system.

In an interview with GNA Entertainment, Amerado explained that as a rapper you should be able to give music lovers what they want regardless of your passion for rap.

“Coming up has been very tough. Whenever a rapper discovers his craft they always want to say true to their passion but you would sometimes have to change to suit your audiences.

“I started off as a hardcore rapper but I do switch sometimes because the majority of Ghanaians want danceable songs.

“Most young rappers do struggle because music lovers want a mix of cool and hard music, so sometimes you would have to switch to get the attention but the most important thing is being charismatic and getting the right ideas to push yourself to the top,” he noted.

Despite having gained popularity with 37 episodes of “Yeetensem”, Amerado revealed that his team was planning on something new that would excite music fans and should be on the lookout for his new project.

Amerado added that one musician that had inspired him in the music industry was award-winning rapper Okyeame Kwame considering how he has branded himself over the past years and continues to excel.

When asked who he considered as the greatest Ghanaian rapper of all time, Amerado said: “It would be very difficult to pinpoint one person but I can say the likes of Okomfour Kwadee, Reggie Rock Stone Obrafour, Lord Kenya, Obour, have all paid their dues to Ghanaian music and they have all inspired me to become a better rapper.”