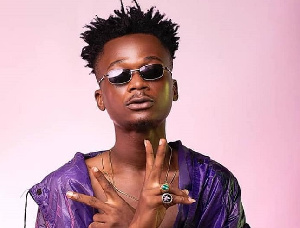 For an industry that is believed to ‘kill’ its many young talents before they blossom, it is always a thing of joy when a new artiste is able to breakthrough.

However, while these underground artistes have to deal with the poor structures in the industry which can cut their dreams short, they perhaps also have a bigger issue of dealing with senior colleagues who ‘steal’ their songs.

In a conversation with the Graphic Showbiz recently, emerging musician Imrana, who is known for the song Imagine Say, disclosed that some big artistes are into the habit of stealing songs of unknown acts.

“I know this is a difficult issue to raise but somebody has to say it the way it is. Sincerely, some of these big artistes are just sabotaging underground artistes by stealing their songs.

“I know there are few bold ones who have come out to tell their story but they don’t get justice because they are fighting against giants.

“It is very unfortunate that this issue has been shelved but I believe it is time for an open discussion since it is killing the energy of young artistes,” he said.

Up and coming artistes complaining of their songs being stolen is obviously not a new thing. In 2012, Asem released a Hip-Hop track, Show Something off his Solid Ground album.

Shortly after the release, Purp’man, a Ghanaian rapper based in Chicago, USA, accused Asem of allegedly stealing his beat which he (Purp’man) used for his song Y U Bore. Purp’man claimed he released his track before Asem’s album.

In the same year, Hiplife artiste Rashid Metal also clashed with Stonebwoy over the hit song Baafira when he accused the latter of allegedly stealing his intellectual property.

The latest alleged music theft came up last year when rapper Kweku Smoke accused Dancehall artiste, Shatta Wale of stealing the beats for his Yedin song when he played it for the Taking Over hitmaker.

Though Imrana avoided mentioning names of the culprits or even citing examples, he said it had been a “long tradition” which should be addressed since it is unfair to new acts.

Imrana also accused sound engineers and producers of aiding the top acts because they mostly sell the idea and songs to such big artistes.

“I don’t blame these artistes entirely because some sound engineers and producers sometimes give the songs to them.

“For instance, when a young artiste records but doesn’t have the resources to master or complete the production and leaves it with producers, they sell them and defend that it is their property which is not right.

“I’m expecting a lot of bashing for this but I’m very ready for it because somebody has to stand up for the truth,” he said.

The song got endorsements from some notable acts including Dancehall artiste Samini who he later featured on a remix.

Imrana, who is currently promoting his newest material titled Who Born You featuring Fameye, also urged the media to give attention to budding talents to provide variety to music audiences.