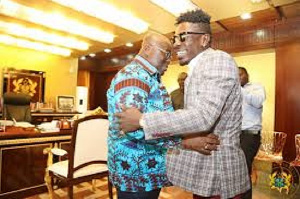 This comes after his manager, Bulldog, said the popularity of his artiste surpasses that of President Nana Addo Dankwa Akufo-Addo.

According to him, the ability of Shatta Wale to draw a massive crowd based on his charisma and appeal to the public gives him the edge over the president who is arguably the most popular figure in Ghana.

Speaking in an interview with Angel Drive Host Ike De Unpredictable on Kumasi-based Angel Fm monitored by MyNewsGh.com, Shatta Wale explained that “What my manager Bulldog is saying is true. I’m more popular than President Akufo-Addo”.

He added that “President Akufo-Addo cannot sing like the way I sing and Ghanaians follow showbiz more than Politics”.

“Though I’m popular and I have plenty people who support my music but I will never disrespect President Akufo-Addo because of my popularity. He is our president and he deserves our respect” Shatta Wale noted.

What Kennedy Agyapong told Shatta Wale when both met in Kumasi