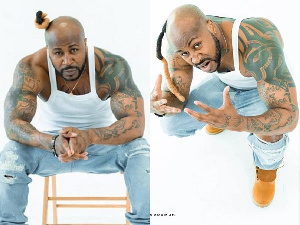 Promzy Africa, a former member of the group, VIP, has sent music lovers talking following the release of a new hairstyle, which fans have described as “out of the world”.

The artiste who has been missing in the music scene for years after his split from the VIP group, originally made up of Abdul Hamidu Ibrahim (Lazzy), Joseph Nana Ofori (Prodigal) and himself Emmanuel Promzy Ababio (Promzy).

The artistes back in the day entertained Ghanaians and the rest of the world with their hit songs.

In a recent post, Promzy who has bald had a single dread that has been dyed gold hanging from the right side of his head. According to fans, he has managed to keep his good looks over the years however his hairstyle has got people talking.

The caption to Promzy’s recent photo read: “Did y’all really thought I left? I was just warming up. @Promzyoriginall on Instagram. Praaaaahh #PIP coded #PROMZY.”

Official Slim in reaction question the ‘strange’ hairstyle: “What is the name of his hairstyle?”

Tonto Nash also added: “He has been my crush ???? since my childhood.”

Source: www.ghanaweb.com
Related Topics:PromzyVIP
Up Next