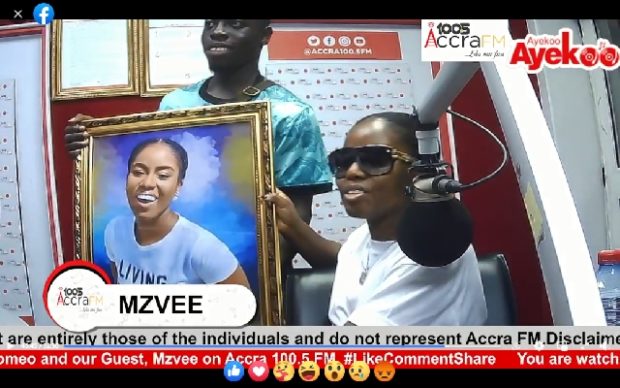 Some fans showered afro-pop sensation Mzvee with gifts when she appeared in the studios of Accra100.5FM on Thursday, 14 October 2021, to promote her latest song ‘Coming Home’ featuring Nigerian music sensation Tiwa Savage.

Another fan, Kobby, presented MzVee with a hat and sunglasses.

A grateful MzVee said a similar showering of gifts on her happened during an interview in the studios of a radio station in the Ashanti Regional capital, Kumasi.

MzVee, who left Lynx Entertainment some three years ago, said her biggest achievement after her exit was maintaining her composure as a relevant female artiste.

She noted that being a female artiste is one of the most difficult terrains to traverse in the music industry.

Commenting on the issue of payment of royalties, she said many musicians in Ghana do not get anything from the Ghana Musicians Rights Organisation (GHAMRO) and the Musicians Union of Ghana (MUSIGA) but are making money from other international platforms.

“In Ghana, the industry is open to all but if you go to East Africa and Nigeria, the situation is not so”, she explained.

In those countries, she said radio stations can only play five per cent of foreign music with the rest being East African genres.

Radio Gold, XYZ, 131 others yet to receive re-authorization letters from NCA – GIBA