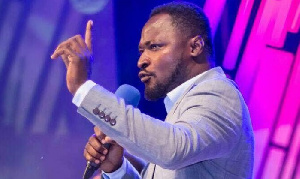 Comedian, Funny Face has asked ladies who are willing to get married to him to forward their CVs to his friend Emmanuel Adebayor.

According to him, he has another set of twins in his manhood he needs to unleash onto the earth so he will need a woman who will love him for him in order to produce the children.

He added has that apart from the CV, it’s imperative that the woman will have huge backside because that’s an added advantage.

Funny Face has not been lucky with relationships as his has gone through two divorces already.

His current wife according to him, left their home with his twins when he stepped out of the house to attend to some businesses.

Related Topics:funny face
Up Next