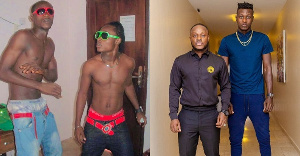 • Fans have reacted to an old photo by music group, Keche

• According to fans, Keche Andrew and Joshua should be grateful to God for their growth

• The two shared a throwback photo of themselves on Monday, September 6

It is not yet Thursday but music duo, Keche, in a throwback photo, have re-lived their humble beginning in the music industry with one of their old photos.

The group made up of Joshua Kojo Ampah and Andrew Kofi Cudjoe have shared an old image where they were captured topless in a pair of jeans.

Judging from their current state, fans stated that the two have come a long way.

In the latest photo, Keche Andrew captured in green sunglasses had paired his red boxers with a red belt whereas Keche Joshua rocked the same pair of sunglasses in red.

The photo shared by Andrew was captioned: “Hmmm if you laugh p3 hellfire straight …. Mind you we were the best and the finest that time…lol, even @kechejoshua_ had 7girls ….. @kingmojoe101 thanks for keeping these for over 15years ….., but don’t post any else courts .., we only have the right to post it when we decide lol…. @joanagyancudjoe come see the sexy body.”

Kesse, reacting to the photo on Instagram, stated that God has been faithful to the duo. He wrote: “Eeiii nyame aye bi oooo.boii…mo nda nyame Ase wae.”

Another, Afia Kyere wrote, “It’s the red belt and the red boxer for me.”

The duo who were formerly under Spider Lee Entertainment are now signed on to the Skills Team, managed by Joana Gyan, the wife of Keche Andrew.

VIDEO: ‘We are made by the fans’ – Shatta Wale sprays cash on fans in Ada