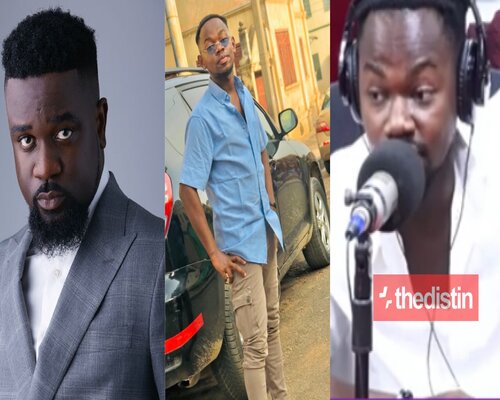 Adu Gyamfi Pius, the Asuofia based young man who talks faster than Ghana’s fastest rapper, Sarkodie as he tell more about himself in the studios of Angle FM in an interview.

According to Gh Fastest Talker who is also known in real life as Adu Gyamfi Pius revealed that he comes from Obuasi but stays at Asuofia in the Ashanti Region.

According to Fastest Talker, God has gifted in him the ability to talk fast and he wants to make a living out of it as a big brand just like Sarkodie, other celebrities and public figures.

Adu Gyamfi Pius known professionally as Fastest Talker revealed that many are amazed by his talent and he wants to feature Sarkodie.

However, Fastest Talker explained that he doesn’t rap like Sarkodie but his is just talking faster.

Fastest Talker detailed that some people think he speaks faster because Ghana’s automaker Kantanka made him and has battery installed in him.

He debunked such claims revealing that he is a human but gifted with such talent.

Fastest Talker in his interview got all the panelists and guests inside the studio of Angel FM laughing harder as they disclose his talent is rare in the country.

Fastest Talker also does short comedy videos that features him exhibiting his talents and due to how unique he is, he has managed to be on interviews from one radio and tv stations to the other.

Also, Fastest Talker once wowed Okyeame Kwame during his interview with a media house when he called and spoke faster with the rapper.