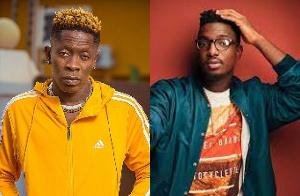 • David in a tweet described Shatta as “one big empty barrel”

Ghanaian dancehall musician, Shatta Wale has promised to physically take on anybody who disrespects his brand.

Shatta has threatened to beat up music video director, David Nicol-Sey for calling him “one big empty barrel” and disrespecting him on social media.

“David Nicole-Sey, I will beat u personally for insulting me so go report to police cuz I will beat u …the worse is arrest ..am too gangster if u care to know… I never know u to insult you but from afar u did ur best…Don’t let us meet ..trust me, I will beat u,” Shatta Wale wrote in a tweet dated, September 10

In his response, this is what David had to say to Shatta’s threat, “Hahahahahahaha! Try make we see. Meet me physical and try am. Ego over you!”

In a series of tweets sighted by GhanaWeb, the SM Boss who has been under attack for his comments on the state of the music industry and also the high cost in shooting music videos dared his critics to confront him physically if they are men enough.

“You guys can talk to other celebrities like that but as for me this time dierrr beatings paaa ..cuz most of you don’t respect .. #BANDANAISBACK #NIGHTMARE,” he wrote.

In a separate tweet, the Dancehall King added: “Sometimes people talk on the internet as if they can talk like that in real without a slap .. Internet will make u feel you are losing whilst you winning out there I said our music industry is a shame .. Come and let’s fight.” 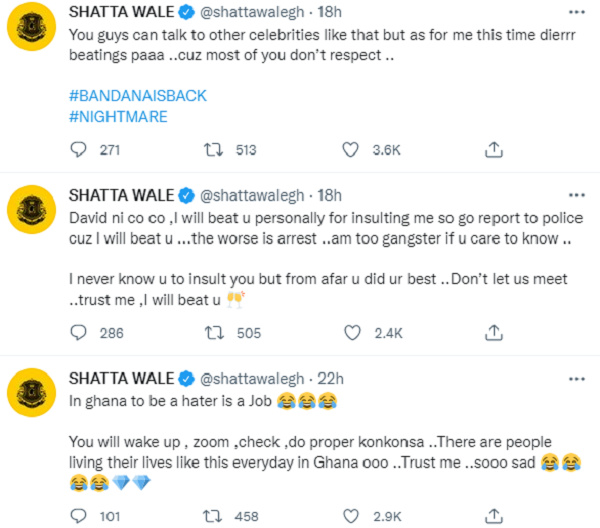 Related Topics:Nicole-SeyShatta Wale
Up Next