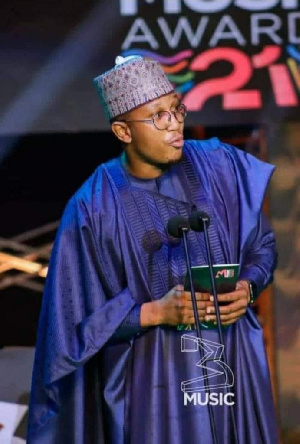 • He made this known in a leaked audio

• According to the 3Music boss, he never rigged the 2019 awards

If you were thinking that the feud between dancehall musician, Shatta Wale and the CEO of 3Music, Sadiq Abdulai Abu was just an online beef, then you thought wrong as the latter has threatened to beat former up.

In an audio making rounds on social media, Baba Sadiq whose brand and reputation is on the line following an allegation made against him by Shatta Wale, promised to physically take the artiste on.

“If I see you physically huh…You wale I go (will) beat you,” he said during a phone call with Shatta Wale and the owner of Fantasy Dome, Leslie Quaynor.

According to the SM Boss, the owner of 3Music in 2019 gave him 11 awards to spite rapper Sarkodie and Stonebwoy. Shatta confessed to have not merited all the awards he took home on the night of the awards.

But reacting to the allegation, Baba Sadiq has dared Shatta to return the awards if he so wishes.

“In fact, if Wale feels that in 2019 he didn’t deserve 3Music Awards. I think that he can return it. I am sure the board may formally consider it. He can return it and probably carry the tears that he shed on the stage. I didn’t shed that tear. I wasn’t the one that gave the speeches.”

He again denied ever planning with Shatta Wale to rig the awards in his favour.

9 relationship proposals that will warm your heart