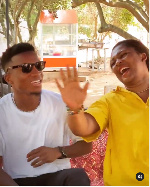 For an artiste who has won Song Writer of the Year three times at the annual Vodafone Ghana Music Awards, Kofi Kinaata commands a good number of loyal fans who have come to love him for his musical prowess and lyrical dexterity.

The Susuka hitmaker took to his Instagram page to share a video of a beautiful moment he had with a female fan whom he has described as his number one fan.

According to the Fante multitalented rapper and singer, he got the opportunity to meet the female fan called Kotoko at Asante Akyem Agogo.

In the video sighted by GhanaWeb, the two are seen seated together having a time of their life as they happily sang Kinaata’s Behind the Scenes which he said is the female fans favourite song of his.

The artist in the post made mention of the visibly genuine excitement of his number one fan which could be seen on her face in the video of their memorable moment together.