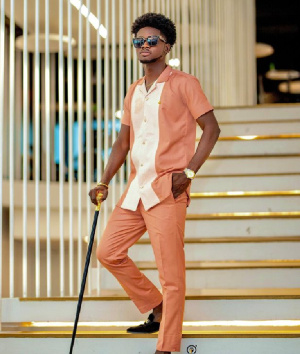 The reigning VGMA Artiste of the Year, Kuami Eugene, has on several occasions been criticized for his poor fashion sense.

According to some ‘Fashion Police’ in Ghana, although he makes good music, little can be said about his style of dressing.

The Lynx Entertainment signee was recently lambasted for failing to turn up for the occasion during the presentation of a new 2020 Range Rover to him by the CEO of Angel Group of Companies.

He has on numerous occasions been trolled online for dressing “poorly” and “inappropriately” for Red carpet events.

In one of his response, he described his critics as ‘shallow and light-headed” and urged them to rather channel their energy into developing themselves.

In what may seem like a subtle jab to his critics, Kuami Eugene in a video sighted by GhanaWeb on Instagram put on display various looks to prove that he is a ‘drip lord’.

Styled by Kelvin Cent, the “RockStar” as he is popularly called, was dripping in all 6 different looks.