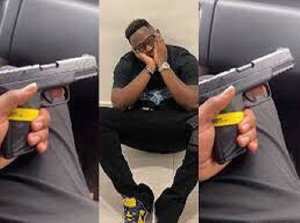 • Medikal has been arrested for brandishing a weapon

Barely a few hours after his close confidante and some three other persons were handed a week remand sentence, rapper Medikal, known in real life as Samuel Adu Frimpong, has also been arrested by the police.

Medikal’s arrest follows the arrest of dancehall artiste, Charles Nii Armah Mensah and three others persons who have been charged with dissemination of false news, causing fear and panic, and abetment of crime.

According to a report by Citi News, Medikal has been picked up for brandishing a gun on social media.

“I can confirm to you that the Accra Regional Charge Office here, Medikal is currently in there. I saw him with the wife, Fella Makafui. Some few moments ago, they came out and went back inside. And credible information we have picked up from the police is that he brandished a gun on social media which was captured on video,” Anas Seidu of Citi News reported from the Accra Regional Police Headquarters.