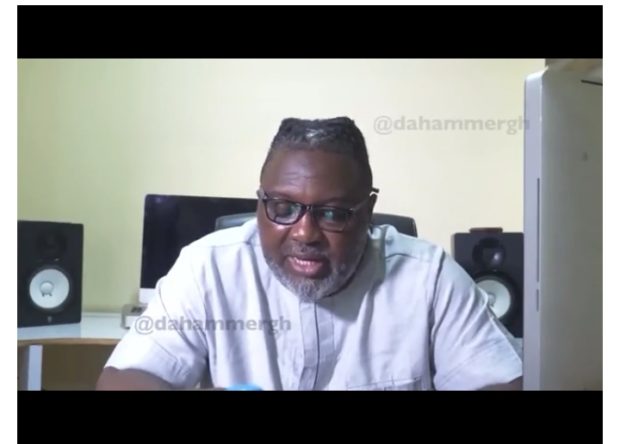 Ghanaian music producer, Edward Nana Poku Osei, popularly called Hammer, has been recounting his ordeal when he tested positive for the novel Coronavirus.

He described his COVID-19 period as being through “hell and back”.

Narrating his situation in a video, Hammer said he had unbearable panic attacks at 1 am where the nurses in the hospital were asleep and he was not able to reach out to them because a bell which he was supposed to ring was not working.

At the time, Hammer said he had difficulty in breathing at which point he actually thought that will be the end of his life but he decided to make a video of his situation when the situation normalized.

Hammer further indicated that he had to fight to survive after going through an intense one-month gasping for oxygen when he was admitted at the Bemuah Royal Hospital at East Legon, a suburb of Accra.

He said, the whole episode started off with him having symptoms of malaria, so, he decided to do what many Ghanaian will do, thus, by self-medicating but after taking the dose of his malaria drug through the regular course and not getting better, he decided to go to the hospital where a doctor diagnosed him of having malaria and typhoid.

It took a nurse, who was also a fan of his act, to tell him that his numbers show a different thing, therefore, he may be suffering from a different kind of sickness but since a doctor had diagnosed him with malaria and typhoid, he should go ahead with his treatment.

“So, a month ago, I had malaria in Ghana terms. I treated it with Coartem (a malaria drug) for three days, as I should and I started feeling more feverish. So, I went back to the hospital because I wanted to test for malaria. I tested for malaria and typhoid and they saw some malaria and typhoid in my system so the doctor gave me medicine. But then the nurse, who is a fan, saw my numbers and said ‘I don’t know much, I’m not the doctor but the numbers I’m looking at, your malaria and typhoid levels are insignificant. When people get numbers like these, we don’t even treat them.’”

“I came home and administered another three days of my medicine. Then the situation deteriorated. It became something crazy. I couldn’t breathe. There was not enough air in the room. AC and everything was on but I had to come outside my house to breathe. I wasn’t coughing. It was my cook who said ‘dad, you are sick. This is serious,’” Hammer stated.

Hammer indicated that, he asked his cook to order an Uber for him to go to the hospital, upon his arrival and noticing how severe his situation was, the Uber driver suggested that he is transported to the hospital in an ambulance so he [the uber driver] called one to assist him.

Hammer explained that he was immediately treated for COVID-19 when he arrived at the hospital because his saturation level was alarming.

“As soon as I got there, they saw that my saturation wasn’t good at all. It was 80 and getting below that. It was very bad. Immediately, they started treatment for Covid-19 without even testing. I started coughing for the first time, everything started changing. They summoned the laboratory to test me. I couldn’t breathe, it felt like dumbbells were on my chest. (I have really suffered, God).

“It came back positive for the third wave of Covid-19, full-blown and that began my ordeal.”

“I think it was 1 am, I was suffering. The bell that calls the nurses wasn’t working and so I really thought I was going to go. My breathing became a problem. I was suffering, I had a panic attack. It was 1 am and I was calling the nurse, I think I actually shed a tear because I was scared.”

“I was afraid, actually, I was afraid and I thought I was going to go,” Hammer stressed. “I have been in the battle of my life. I have faced an adversary that I have never faced as long as I’ve lived. I’ve been to hell and back basically. It is important that people know what lurks around our neighbourhoods, our offices, our daily endeavours.”

On why most COVID-19 survivors do not share their story after they have recovered, Hammerattributed it to fear of stigmatization.

“I noticed that the survivors of Covid-19 for the fear of stigmatisation are quiet. There is not enough education to let people understand anything once you are cleared and you have tested negative like I was. I tested negative twice after my recovery. Once you are clear, it is okay. You just have to adhere to the protocols. People need to realize that they have to stop branding the Covid-19 survivors.

“I think that is why everybody is quiet and so the general population keeps on saying ‘this thing is it real? I don’t know anyone who has contracted it’. Those who died from Covid-19, even their families for the fear of being stigmatized are not admitting that these people died of Covid-19. There is no education, people would have taken these things seriously if they knew that there are survivors. People who walk among them and have gone through this and survived.”

Watch Hammer tell his COVID-19 story in the video below.

PHOTOS: Adebayor gives “Funny Face” another car after his accident