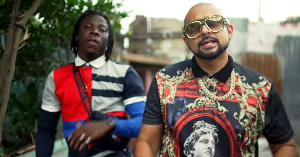 Sean Paul in an online interaction showered praises of Stonebwoy adding that there are some artistes who are doing dancehall but they don’t really portray the authentic dancehall songs.

Sean Paul added that he has read a lot about the Burniton Music Group Boss and he likes how he does his style of music and truly admires him.

Sean Paul appreciated Stonebwoy for travelling all the way to Jamaica for production.

Sean Paul is gearing up to release two albums ‘Scorcha’ and ‘Live and Living’ and Stonebwoy was the only African musician featured on the project.