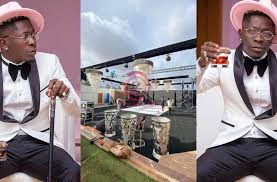 The boss of Shatta Movement Records, Shatta Wale has just acquired a new plush house which is reported to have cost him a whopping $200,000.

From the little gathered from the video he shared online Shatta Wale purchased the already built and fully furnished house from Embassy Gardens. The video was therefore captured to show his fans and all the people who follow his craft keenly how the deal was successfully sealed in the end.

In the last few years, Shatta Wale has been acquiring a lot of houses and plush cars in his name and he has not failed to rub them in the faces of his colleagues who are supposedly poor.

This new addition will certainly mean that his fans and colleagues in the industry must prepare their ears for more trouble from Shatta Wale.