struc Shatta Wale returns to social media with a Rolls Royce estimated to cost US$330,000 - Home Of Ghana News 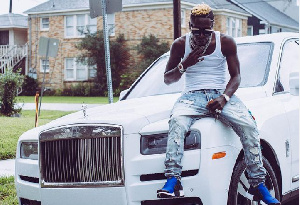 • Surfacing with a degree of pomp, the musician has been spotted in a Rolls Royce

Almost a month after announcing a break from social media, Shatta Wale has bounced back with a bang as he has flaunted a Rolls Royce Cullinan said to cost not less than US$330,000.

The first video he shared on social media to announce his comeback hours ago, captured him in casual attire posing in front of the car.

“Only you can congratulate yourself Shatta Wale All you pray for is progress and they don’t see it. Move forward and don’t look back, you are blessed…welcome back #KOAD #GOG” the caption of the post read.

The Dancehall giant has subsequently shared more photos and videos of himself and the luxurious car.

While it is unclear whether he owns the vehicle or nor; and whether the footage is from a music video he has shot, one of the captions read: “Movie”. What is common as far as his captions are concerned, however, is the use of the hashtag ‘HYLYF’.

Shatta Wale on April 26, 2021, went off social media. Before his departure, he noted that he was doing so “due to my personal reasons”.

This led to speculations, including claims he was unwell. His management however debunked the claim and asked the general public to treat it with the contempt it deserves.

Shatta Wale’s return comes at a time he is being celebrated for winning an international award. Over the weekend, he was adjudged the Best Virtual Entertainer of the Year at the 39th International Reggae and World Music Awards (IRAWMA).