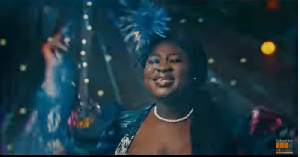 Sista Afia who demonstrated her versatility in the music industry in her latest single shows another side of her creativity which makes her stand out among her fellow acts.

The video directed by Rich Sheff, captures sights and sounds of 90’s, colourful costumes, thrilling and iconic images which runs through the music video as well beautiful cinematography in a perfectly synchronised masterpiece and looks a strong contender for music video of the year award.

The song is readily available on all digital streaming platforms.

Sista Afia has recorded singles with Sarkodie and Stonebwoy which is expected to be released later in the year.

Here is the link to the new music video:

Related Topics:FAMEYESISTA AFIA
Up Next

Sarkodie reacts after his Black Love Virtual Concert went off