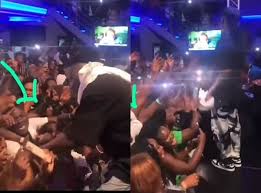 • The artiste paused his performance to fix the lady’s wig

• He has been praised for his kind gesture towards the lady

Ghanaian Dancehall artiste, Stonebwoy has been praised for saving a lady whose wig almost came off during his performance in the United Kingdom.

Stonebwoy who was on stage performing to an indoor crowd spotted the wig cap of one of his fans in the front row almost falling off.

In a bid to save the woman who was jamming to his songs from any form of embarrassment, the Bhim Nation boss quickly paused and walked to the lady to adjust the blonde wig for her.

Stonebwoy continued with his performance after the act. However, some persons who were bent on making the lady uncomfortable managed to pull her blonde wig off her head.

Many have described the dancehall musician as a true gentleman following the incident.

In reaction to the video, Elenam on Instagram said “Bhim knows how to treat a woman ryt.”

Another, Nana Yaa Akwaboah, added: “Stonebwoy touch my wig ano go wash that wig again I won’t put it in water to wash his hands away chai.”

Source: www.ghanaweb.com
Related Topics:performancestonebwoy
Up Next