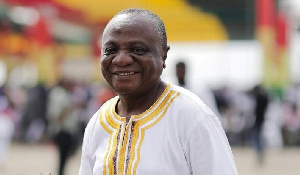 The family of the late Nana Kwame Ampadu has revealed that the Ghanaian music legend had no dying wish aside from his desire for him to be given medical care with the money he had made from his savings, MyNewsGh.com reports.

He disclosed that, the family finds it tragic that the music great had no dying statement as he couldn’t talk after taking ill.

“Hammer, we are hurt that Nana couldn’t make a specific wish or leave us with a message before he left us. Throughout his illness, he couldn’t utter a word even though he could hear us when we talk. For instance, if you ask him to move his limb, he could but he couldn’t say anything to us. We were unable to tell what he wanted and what he didn’t want. It is sad for us.

“I remember the last statement he made was, ‘go and take my money in the bag and send me to hospital’ and this was before we sought medical help for him. Those were the last words he said to us. We find it very sad as a family that he couldn’t tell us what he would want us to do for him.”

He however revealed that, the family has decided to organize a forty-day memorial service for him due to his royal status.

“We will not be doing the usual one-week observation ceremony. He is a royal at Kwahu Obomeng and as customs demand, we will organize a forty-day memorial service in honour of him and we will accordingly make known the funeral plans.”

Nana Kwame Ampadu, one of Ghana’s foremost musician credited with numerous popular highlife tracks and known to have composed over 800 songs passed away this week after a short illness. He was 76 years old.