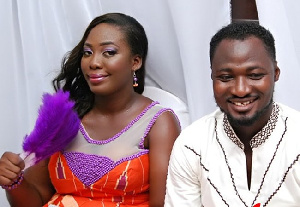 Comedian Funny Face has authored a letter to his former wife Elizabeth Nana Adjoa, asking her to forgive him just as he has forgiven her.

Funny Face in the open letter which was available on his Instagram page said God directed him to make peace with his ex-wife.

He confessed that ever since they broke up, he had “harbored so much hatred and anger” towards Adjoa, and she has “the least idea”.

In 2016, it was reported that Funny Face had ended his two-year marriage to Adjoa. He admitted to the divorce on his Facebook page after a newspaper publication suggested a possible divorce.

“Just saw this…I guess you can’t light a candle and hide it under your bed…People will see the light… It’s been seven months ago…All I will say is, I tried it just didn’t work.”

In the midst of the brouhaha, he suggested the wife cheated on him – reason he broke up with her.

“When someone gives their love, trust, loyalty and you accept to be committed but later throw all their sacrifices to the dogs and cheat on them, you are no different from a witch or a wizard…It takes a huge amount of sorcery and witchcraft to cheat, cheating on your partner is equal to murder,” Funny Face was quoted to have said on Metro TV.

The infidelity claim attracted a rebuttal from Adjoa as a publication quoted her to have said Funny Face was not good in bed.

“I am a beautiful and naturally endowed woman but unfortunately, Nana Yaw Oduro Boateng could not satisfy me sexually. My ex-husband is suffering from early ejaculation and I had cautioned him on several occasions but he wouldn’t listen to me,” her justification read.

In his open letter, Funny Face said he is a happy man because despite being labeled a ‘half man’, he has twins to be proud of.

“I know even though you won’t show it, you are happy that things are moving on well with me now and the 2 minutes issue turned to twins,” he said.