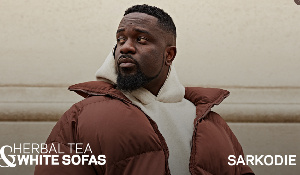 • Fans have gone wild following the announcement on Twitter

• A social media advocate has been praised for spearheading the initiative

This was after Richardine Bartee, a member of The Grammys Recording Academy shared excerpts of the interview which has since gone viral on social media.

Miss Bartee shared the video on September 13, 2021, with the caption;

“Ghana, Sarkodie makes his http://grammy.com debut with a ‘Herbal Tea & White Sofas’ interview! It will be live on the RecordingAcad’s YouTube September 15, at 10 AM PST/5 PM GMT and pushed out on http://grammy.com later that day. Stay tuned!

With the hashtag SarkodieXGrammys, scores of fans have reacted to that particular tweet which has skyrocketed the rapper to top Twitter trends.

‘Herbal Tea & White Sofas’ which is Grammy’s new series where artistes reveal their career experiences, has since its inception featured some international shot-callers.

This is the second time Sarkodie’s name has been featured on Grammy’s website as the Ghanaian rapper whose major goal is to win the Grammy one day had his name appear on their portal for the first time on August 28, 2021.

This was when he was featured in an article with Kenyan afro-pop star Victoria Kimani.

Meanwhile, a popular social media activist, Kalyjay, has earned the admiration of social media users for playing a pivotal role in Sarkodie’s current interview with the Grammy Recording Academy.

This was after tweeps dug out some screenshots which in the past captured how Kalyjay was trying hard to fix a spot on the Grammy show for Sarkodie.

Sometime in October 2019, Kalyjay tweeted at an Academy member, Richardine Bartee, asking when they intend to feature Sarkodie.

KalyJay: Will you be working with Sarkodie any time soon?

Kalyjay: Okay. Thank you. Sarkodie, Over to you king.

Read the tweets below:

Source: www.ghanaweb.com
Related Topics:SARKODIETRENDINGtwitter
Up Next

How Ghanaians reacted to outfits worn at Met Gala 2021

You need haters to make you grow – Wode Maya