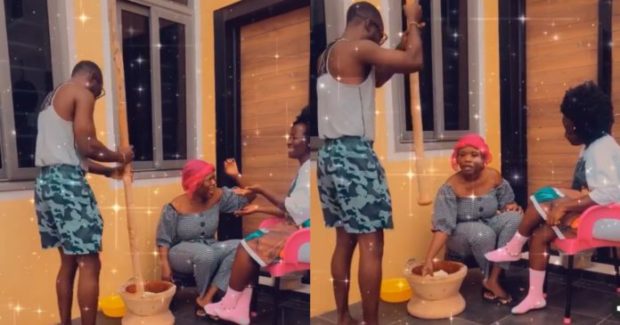 Award-winning TV star and entrepreneur, Deloris Frimpong Manso aka Delay, has stunned fans with a new video on social media.

The video captured Delay in an adorable moment which featured rapper Okyeame Kwame and his wife Annica.

In the video, Okyeame Kwame was seen pounding fufu while on a visit to the tough-talking presenter’s house on Sunday.

The rapper performed the act effortlessly to the admiration of his wife and their host.

Though he wasn’t going to enjoy the fufu with the ladies, Okyeame Kwame stated he was doing it out of love for the duo.

He was heard in the video saying: I am not going to eat but I have to pound it. You know why; when a man loves, he acts like a child but a woman in love is a mother.

Annica and Delay burst into laughter following his statement while he acted unperturbed and pounded the fufu.

Delay took to her Instagram page to share the video to the delight of fans and it has attracted massive reactions.

Posting the video, she wrote: @okyeamekwame came to pound my fufu 🥳🥳🥳🥳🥳 Sunday Special. Mrs Okyeame is also here to support the movement 🤣🤣🤣🤣🤣.

Okyeame Kwame, who has also reacted to the video, quizzed if it was fair he didn’t enjoy the meal with them.