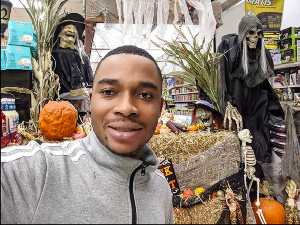 • He says his absence was to focus on his musical career

Barely a day after a close ally of his demanded his whereabouts in a social media post, New York-based government critic, Twene Jonas, has popped up.

He tweeted for the first time in over a week, during which period he had reportedly been arrested over immigration offences.

Jonas, however, said in his post that he was busy with his music career, the reason for which he was absent from social media platforms.

“I’ve been busy lately putting Ghana and American music into international platforms. We will bring awards home soon! Share with 100 people if you are a proud Ghanaian! I will bring a Warm-Up later. Glass Nkoaa. The system is working 24/7,” his post read.

It was accompanied by a short video clip of his music and a YouTube link to the full video.

A September 29 social media post by a man identified as De Don, alleged that Twene Jonas had gone missing for days after all attempts to reach him proved futile.

De Don tasked President Nana Addo Dankwa Akufo-Addo and the New Patriotic Party (NPP) to produce Jonas or that he was going to come down to demand the whereabouts of his friend.

Two weeks ago, a failed Parliamentary aspirant of the NPP, Hopeson Adorye, alleged that Jonas had been sacked from his workplace in New York. He added that for fear of being deported, he has gone into hiding.

Adorye, who was part of a government delegation to the United States, attracted stern criticism by people who said he had been purposefully flown to New York to pursue Jonas.

Adorye’s colleague on the pro-government group, ‘Fixing the Country Movement,’ Ernest Owusu Bempah, described the criticism as unfounded and useless because Twene Jonas was a ‘small fry’ in the general scheme of things.

Twene Jonas is a Ghanaian based in the US and is known for criticising the policies of the current government which he claims are not favourable to citizens. He has on several occasions called out the president and his appointees for failing to develop the country.