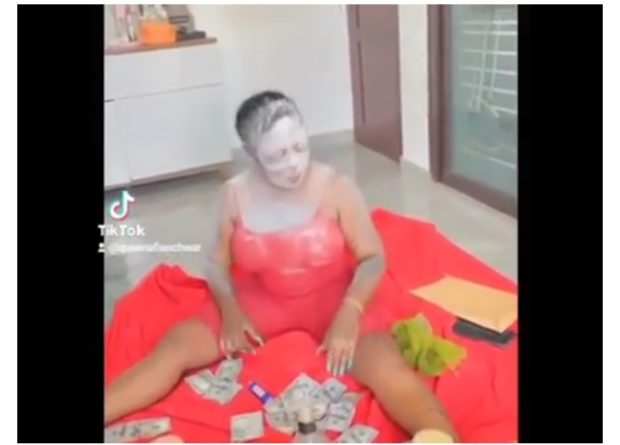 • Afia has made a mockery of Ayisha Modi’s threats

At exactly 3pm on September 8, 2021, controversial Ghanaian comedienne, Afia Schwarzenegger took to social media and posted a video of herself making a mockery of Aisha Modi’s threats to make her mad.

Dressed like a fetish priestess, Afia was captured in a red calico cloth, sitting on the floor and surrounded with bottles of liquor.

A huge painting on Ayisha Modi was spotted somewhere around the scene while Afia Schwarzenegger acted as though she was chanting.

This comes after Ayisha Modi was heard during a phone conversation stating her intentions to resort to spiritual means of fighting Afia.

During the conversation, Ayisha was heard outlining her plan to cast a ‘spell of madness’ on Afia at 3pm on September 8, 2021.

“I will speed up things for Afia for three hours and she will not be the same. If she’s able to wake up the same, then change my name. What I did to her last week is even small. She should just wait and see. At just exactly 3pm you’ll begin to witness things. You wait and see,” those were Ayisha Modi’s exact words to the unknown caller.

But in a bid to call Ayisha’s bluff, Afia Schwarzenegger made an appearance at exactly 3pm on the same day to prove that her plans failed.

She played a recording of Ayisha’s threats as a ‘background sound’, and made mockery of her.

Scores of social media users have since reacted to the post with hilarious comments.

WATCH: Shatta Wale shows off his 7 houses and Bank Accounts as he replies David Nicol-Sey