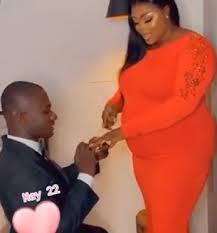 • ZionFelix has proposed to his long-time girlfriend Mina

• The blogger popped the question during a photoshoot session

• The video was posted on Aisha Modi’s Instagram page on September 3.

ZionFelix has engaged his long-time girlfriend, Mina Lawani (Minalyn). This is according to Aisha Modi who broke the news of their engagement with a video on Instagram.

The surprise proposal according to a date on the video, took place on May 22, 2021, during Minalyn’s baby bump shoot with her now-fiancé, Felix Adomako (ZionFelix).

Minalyn who might have not known the plans ZionFelix had on the day appeared surprised when he went down on one knee to ask the question, “Will you marry me?”.

The heavily pregnant lady couldn’t hide her excitement as she kept blushing when her man placed the ring on her finger to confirm her as the chosen one.

The Blogger on Friday released photos of himself and Mina to officially announce the birth of their daughter, Adepa who is already on Instagram as pax_pam.

Aisha Modi, popularly, called ‘She loves Stonebwoy’, congratulated Mina in the post and added that she was going to make a wonderful mother.

The caption of the video read: ” Na who can worry u @minalyntouch whiles am here, I was asleep but I wasn’t dead. Just few hours of sleeping and they want to kill u for me, taaaaaaah Am awake. I pray that the arrival of the grandchild of Nii ADOTEY Gyata the 1st and his only great Queen Naa Adukwei Shikaky3 the 1st shall be a blessing to our motherland Ghana. I know you are going to make a wonderful mother. Allow me to say congratulations on the arrival of your bundle of joy. Congratulations on the birth of your baby! @zionfelixdotcom you are wanted by your father Biko report urself.”