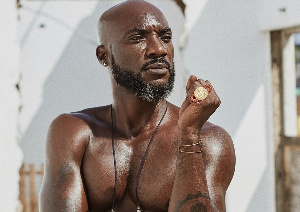 Popular Ghanaian Hi-life musician and guitarist, Kwabena Kwabena has asserted that here in Ghana, the ladies are more unfaithful in relationships and marriages than the men.

Justifying his assertion in an interview with Sammy Kay on the Go online show, the ‘ladies man’ stated that in Ghana, people do not speak the truth and revealed that in the situation he finds himself in the limelight as an artiste, anything is thrown at him and also bares the blame for everything but can state for a fact that he is one of the faithful men any woman can ever have.

Sounding philosophical, Kwabena Kwabena disclosed that in this world, you should be able to save peoples reputation even when they don’t save yours so they can continue to have the respect they deserve in their line of work.

He debunked the long held assertion by some Ghanaians describing him as a womanizer and further added by stating that, if any lady he has ever dated comes out to say he was irresponsible and unfaithful to her, God will seriously deal with that person.

Kwabena kwabena after his long hiatus from the media, is dropping a smashing single titled “Kwadeede” off his album dubbed “Fa me saa” on May 28, 2021.

WATCH: Shatta Wale Storm a Club in New Jersey With his Performance