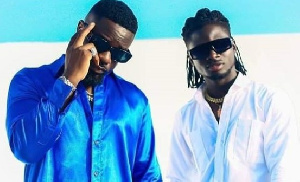 Kuami Eugene ended the week of denial with a performance of Happy Day with Sarkodie at an event dubbed Hero’s Concert.

The two artistes released a song in the course of the week and in the song, Sarkodie used a line which endorsed the second term bid of the President.

But in a video sighted on social media, the singer is seen performing on the same stage with Sarkodie and happily repeating same lines he was complaining about in the course of the week.