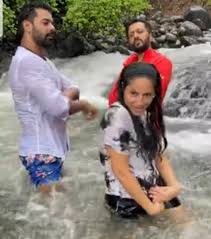 Despite leaving the shores of Ghana seven years ago, Indian actor Shabbir Ahluwalia is still entertained by the country’s buzz.

Known in the movie circles as Abhi, the actor rose to fame from his cast in the popular Kumkum Bhagya series which got fans glued to the Adom TV channel.

In a latest video, Abhi has set tongues wagging after he was captured twerking to KiDi’s Touch It song during his fun time at a waterfall.

He was in the company of other Kumkum casts and Bollywood actors, who also proved they love the 2021 hiplife banger.

They were caught on tape bending and shaking their backside as the lyric “shut up and bend over” came in earshot.

He posted the joyous moment on his social media platform and gave a special shoutout to Kidi and Ghana with a love emoji.

This was after they had reunited at the home of one of the Bollywood casts to observe some Indian rituals.

Abhishek Mehra starred as the lead character in Kumkum Bhagya where he played the role of a musical Rockstar.

I will beat you physically – Sadiq warns Shatta Wale