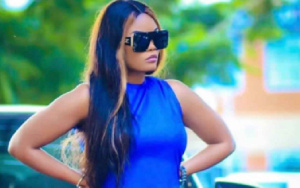 Love who stands in the middle of the ongoing beef has unleashed series of attacks on Aisha in a bid to state her side of the story.

Earlier, Magdalene Love was accused of allegedly having sexual relations with her ‘cousin’ Shatta Wale.

Aisha Modi in a live Instagram video on February 3, 2021, disclosed that one of the reasons Michy broke up with Shatta was because he was ‘bonking’ his purported cousin right under their roof.

But in reaction to this, Love has labeled as false all the accusations being leveled against her.

She has denied any form of family ties with the Dancehall musician; adding that they met when she was only thirteen years old.

“What didn’t people say about me and Shatta? When he had problems with Michelle, people said a whole lot about me yet I did not respond. God knows the truth. I met Shatta when I was thirteen years so it’s very stupid to say I’m dating him. I’m not in any way related to him. When I met Shatta, nobody even knew him as Bandana,” she fumed.

She also accused Aisha Modi of being a lesbian.

According to her, Aisha’s constant habit of sleeping with women was the main reason why Ofori Amponsah divorced her.

“Why didn’t you also state that you are a lesbian? You are a wild lesbian and you sponsor women, organize parties for them and so on. Go and ask why her ex-husband left her. It’s because she is a lesbian,” she stated

She also disclosed that Aisha is the type that does not like to take her bath.

“She doesn’t like to bathe. At least I know lesbians are neat but as for this one, she hates bathing,”

Related Topics:AishaMODIShatta Wale
Up Next