struc VIDEO: ‘My health is bad’ – Kohwe speaks after a photo of his current condition went viral - Home Of Ghana News 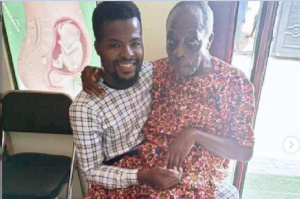 A recent picture of veteran Ghanaian actor, Kofi Liang, well known as Kohwe which has gone viral aside from showing indications of old age catching up with the actor, also had him looking sick.

Oman Channel caught up with the veteran actor at his home where he was interviewed together with his first wife and one of his sons.

Asked how he was doing, Kohwe who now struggles to put words together and speak audibly stated that his health has not been in the best of conditions.

“My health is not that good,” was his reply.

Kohwe started his acting career in 1971 and was an active character in the Akan Drama and District Colonial Court which were popular series back in the days.

He also featured in several local movies and was regular in the Kumawood block of the industry.

Kohwe sometime in 2019 bemoaned how the conditions of veterans who worked hard to bring smiles to the faces of Ghanaians tend to be nothing to write home about.

“Don’t wait for me to die, before you pay glowing tribute to me for my wonderful contribution, your tribute will be meaningless because it will not bring me back to life,” he stated when some colleague actors paid him an earlier visit.

While looking more feeble in his current state, Kohwe during the interview repeated his call for more attention to be given to the welfare of veteran actors.