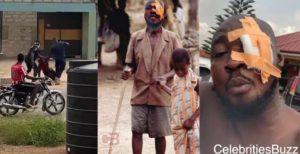 He said as a result of the punches he received on his eye, he is having difficulty seeing clear. He vowed to deal with the police officers who initiated his arrest.

Funny took the opportunity to tell the police officer their ‘Maame Tw3 baako baako’ once again.

Many people are saying he is faking it just for the clout.

DOWNLOAD MP3: Are you OK? By Okese1 Andy Dosty Diss (Prod. By EbotheGR8)