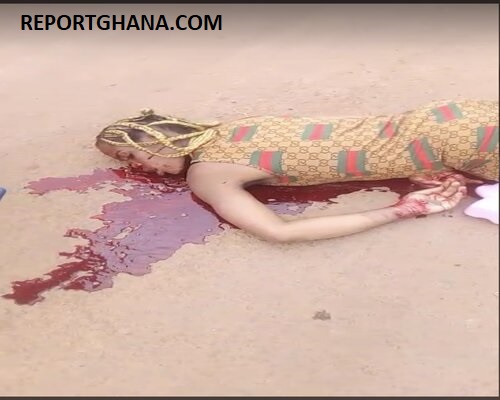 A young beautiful lady has been found dead in cold blood after a video of her twerking for some young men and partying with them hit online.

Few hours to her untimely death, she was seen in a video that has gone viral on the internet twerking and partying hard with some young guys believe to be ‘Sakawa boys.

In the video, the lady who was full of life could be seen crazily dancing and clapping her soft backside to the background music.

One of the young men, who was seated was seen putting his head on the lady’s backside whiles playing with her softback.

Soon after she left the party scene, the young lady who was dressed in a yellow, red and green low-cost Gucci straight dress (Tagoo) was found dead.

She was seen on the floor in what appears to be the middle of a road in a cold blood while she was still in her attire.

We cannot confirm the cause of her death. However, eye witness says that they met her in her blood.

Reports indicated that the body has been deposited at a local police morgue pending autopsy and investigations.