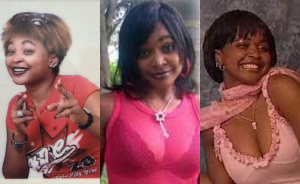 • Today marks 16 years of the death of Suzzy Willaims

• She starred in movies including Tentacles and Calamity

Today, September 8, 2021, marks exactly sixteen years of the demise of the celebrated young actress, Suzzy Williams, who died in a car accident with her Liberian boyfriend on the La-Nungua highway in 2005.

The actress known for her “bad-girl” role in Ghanaian movies rose to fame in the early 2000s. Suzzy was tagged as Ghanaians “screen goddess” due to her exceptional talent.

Her demise was a big blow to the movie industry as she lost her life at a time where she had gained popularity in Ghana and other African countries.

The late Suzzy featured in movies like Tentacles, Calamity, The Comforter, Mother’s Heart and Bloody Mary.

To mark her 16 years’ anniversary, Ghanaians have shared their fond memories of the late actress.

Below are some reactions on social media:

Buju speaks on his exit from Burna Boy’s label