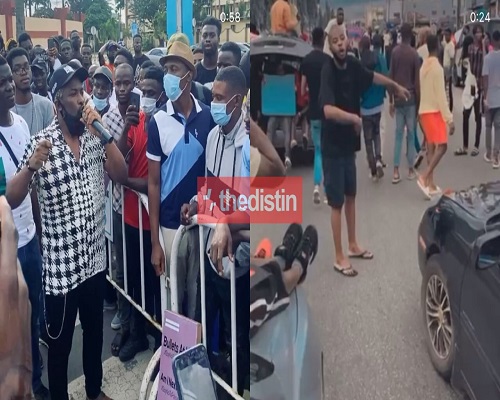 A guy called Davido has been shot while protesting during yesterday’s End SARS incident in Nigeria.

On Thursday, 9 October, Nigerians went on a protest across some streets and it included some Nigerian A-List actors, musicians and reality stars.

Among the celebrities were, Tiwa savage, Falz, RunTown, Tacha, Toke Makinwa and many others embarked on an operation ‘EndSars‘ to make it as a notice to the leaders to make sure police brutality ends.

A video has been fast trending on social media as one Davido was rushed for urgent treatment after he was shot at in his manhood.

According to reports, he was not the only person who was shot but additional two persons were also rushed to the nearby hospital after being shot.

Davido was protesting during the much viral end of SARS when a police officer allegedly shot him.

In the video, Davido was struggling to walk, however, his friends aided him to the hospital.

Well, from checks made online, it was revealed that it was not the DMW’s Davido that got shot but another Davido.

No Bra Day: 7 Killer Pictures Of Ghanaian Celebrities Without Bra