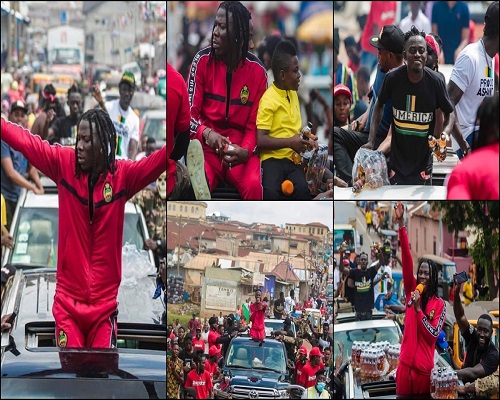 Stonebwoy and the Big Boss Energy drink have taken their Big Boss Roadshow, which kick-started in Ashaiman all the way to the Kumericans in Kumasi.

The road show which was actually launched by Bel Beverages adds up to Stonebwoy introducing a rebranded version of the Big Boss Energy Drink but this time with his image on the label.

According to report, the idea behind Stonebwoy’s image being on the energy drink is for the purposes of creating a bond between the product and his fans, the determination , the values of his hardwork and the global appeal he actually portrays.

Kumawood actor Lil Win and Yaw Dabo also showed massive support for Stonebwoy by joining him on his roda tour. They were captured giving out the Big Boss Energy Drink to the fans and followers of Stonebwoy. Amidst the distribution of the free drinks, Stonebwoy, Yaw Dabo, Lil Win were all captured throwing cash to the crowd. The lucky ones got 1 cedi notes, 5 and 10 cedis notes respectively.

Checkout the video below;

Oteele Trends On World “No Bra Day” With His Gargantuan Breast