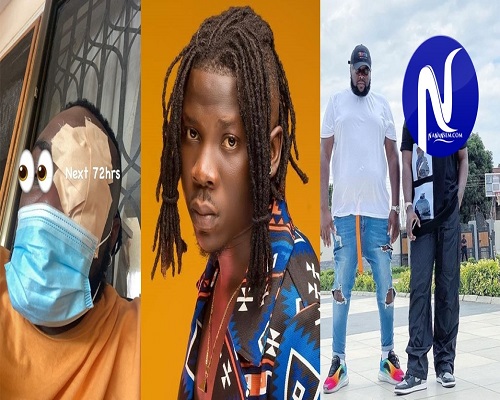 Rapper Sarkodie has promised to provide an explanation into the incident that got his manager’s right eye injured.

Sarkodie’s manager, Angel Town, on August 10, had a scuffle with dancehall artist, Stonebwoy over a parking slot at the rehearsal session of Sarkodie’s upcoming ‘Black Love concert’

Ever since the incident happened, there have been different accounts of what got Angel a black eye.

“This whole fight was over a parking space Stonebwoy was denied, he was told it had been reversed, only for him to see Shatta Wale’s car parked there…He pulled out a gun. Angel Town also pulled a gun, but for God, can you imagine what could have happened?” radio host, Ola Micheal recounted.

Speaking on Joy FM, monitored by theghanareport.com, the rapper said he wants to get the show which is billed for Saturday night out the way before commenting on the issue.

“A lot has been happening in the media about Stonebwoy and my manager, but I deliberately don’t wanna have a conversation on it now because the focus is just to have the show out of the way tomorrow”

“I promise after tomorrow [Sunday]we will deal with every situation and whatever people want to know about it, there will be a breakdown of it.”

When asked if Stonebwoy was still on the bill to perform he said “my fans will have to watch to find out” he said.

Stonebwoy came under a barrage of criticism for slapping Angel Town

“Stonebwoy must be told the truth…his decision to always allow his emotions to decide for him is a recipe for his downfall. We know a lot of dancehall artistes who ended up in jail because of such attitudes and their music careers never remained the same, it ended”

“If care is not taken, Stonebwoy may end up in jail for his behavior,” he explained.