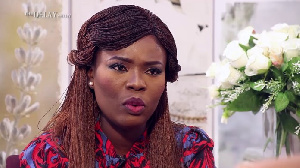 Television personality Deloris Frimpong Manso(Delay) appeared puzzled over the supposed wealth of Maame Esi Forson when the entrepreneur and filmmaker took her turn on the Delay Show.

24-year-old Maame Esi Forson claimed she has a 6-bedroom mansion which she built within three (3) years. According to the actress, she started building when she was eighteen (18). The mansion, she said, was not the only property she has been able to acquire; she has ten (10) cars and plots of land.

Maame Esi claimed she used the profit she made from operating a restaurant to fund the building of the 6-bedroom house, a statement that got Delay curious.

“What at all were you selling at that restaurant?” Delay asked.

In response, Maame Esi said she “sold food but was taking orders from companies”. The staff of these companies, according to the actress, became her clients, courtesy of her manager.

She said: “My current manager is a businessman so I got some links and advice from him. He linked me to some companies. I could supply 200 people a day from different companies. One plate of food is GH¢30 and I got a profit of GH¢10 per plate.”

Although she was unsure of the exact amount she spent on the mansion, Maame Esi said it was more than six hundred thousand Ghana cedis.

“I started building when I was 18 and finished at age 21”, she claimed, while indicating that the money she used to set up the restaurant was meant to fund her education.

“My mother who is a farmer gave me that money. It was for school but I invested it in a restaurant.”

Maame Esi has starred in films including ‘Boafo Ne Hwan?’ and ‘Classmate’.

Watch the interview below.

I can never forgive T.B Joshua for what he did to me – Actor Jim Iyke