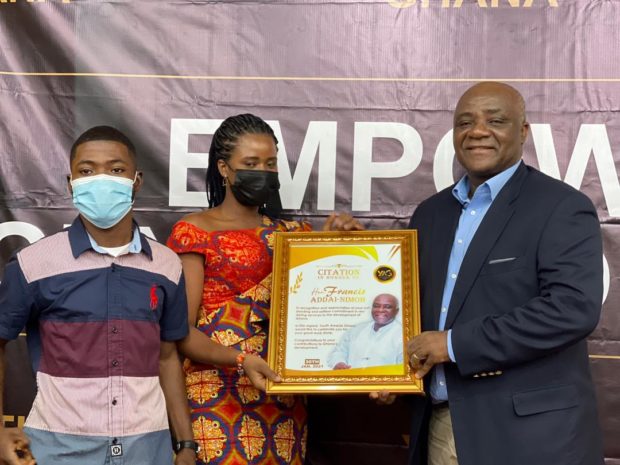 A group by name Youth Awards Ghana (YAG) under the auspices of Nkay Events Management over the weekend honored the former Member of Parliament (MP)for Mampong, Hon Francis Addai-Nimoh for his contribution to the development of his area, the Ashanti region and Ghana as a whole.

In a citation, the group acknowledged the former MP and 2014 flag-bearer aspirant for the NPP for showing exemplary commitment to the wellbeing of the people of Ghana.

The group particularly noted that Hon Nimoh had taken time to pursue development for the people in the Mampong constituency.

The former MP,  a development oriented person was also cited for ensuring that other communities around Mampong as well as in the Ashanti Region and others across the country benefit from his development agenda and projects.

Reading out the content of the citation to Hon Addai-NIMOH at an official ceremony at the Social Security and National Insurance Trust (SSNIT) conference hall in Kumasi, Christopher Frimpong, Chief Executive Officer (CEO) Nkay Management said the former MP had empowered people who had less education.

He noted that Hon Nimoh had with great commitment shown to have the interest of the under-privileged at heart.

The CEO said the youth in Mampong are particularly happy with the numerous contributions of the development expert including the construction of infrastructure and the provision of support schemes to the people in all the communities in Mampong.

Describing Mr Nimoh as an outstanding figure, the CEO said the group was happy honoring such a true statesman and patriot.

Speaking to this reporter after receiving the award, Hon Francis Addai-Nimoh said he was grateful for the honor done to him.

He said the organizers had shown they were monitoring the little contributions he was making to make the lives of people better.

The development expert said it is more blessed to give than to receive, adding that he was committed to doing his best for the society anytime he has opportunity.

The former MP urged other members of the public who are well to do to ensure they support the needy in the society when they get the chance.

DOWNLOAD MP3: Andy Sarfo Releases His Debut Single – Make You No Do Me (Jeje)