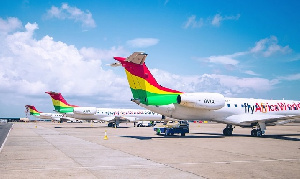 EPA grants permit for the construction of airport at Kwahu

Mpraeso Member of Parliament (MP), Davis Ansah Opoku has disclosed that the Environment Protection Agency (EPA) has approved the construction of the Kwahu Airport.

The proposed Kwahu Airport Limited will be located at the Nkwantanag-Ahinase in the Kwahu East District of the Eastern Region.

Ansah Opoku disclosed this on his Facebook page where he shared a picture of the permit granted together along with a post that read “EPA Permit secured! Kwahu Airport Limited.”

Abetifi MP Bryan Acheampong, previously stated that the airport will help propel development in the region as well as create jobs for the youth.

“Kwahu Airport Limited will be a catalyst for development in Kwahu in the next 10 to 20 years to come,” Acheampong said in Twi.

He further stated that the Kwahu Airport part was part of growth polls identified to help create between 50,000 to 150,000 jobs, in addition to farming and government jobs.

He added that the airport was the first poll, followed by a rock city, then tourism development, sports facilities and expansion of educational infrastructure.

Tags airport at construction EPA FOR Grants Kwahu OF permit THE