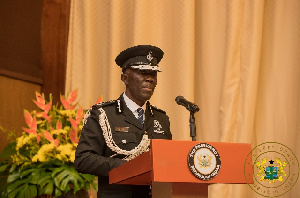 Ghana’s police chief has warned troublemakers in the Krobo areas of the Eastern Region that he will make sure they do not have peace even in their death.

That part of the country has been plunged into darkness for the past few days following the relocation of the Somanya office of the Electricity Company of Ghana (ECG) to Juapong in the Volta Region over security concerns.

Even though ECG explained, through a press statement that the blackout was a result of sabotage by some “unscrupulous persons”, a youth group called the Coalition of Krobo Youth, held a press conference recently at which it said the outage was an “intentionally” planned punitive measure.

ECG relocated its office with the reason that its workers felt threatened by the unfriendly activities of a separate youth group called United Krobo Foundation.

There has been no love lost between the townsfolk and the state power distributor over the past few years in relation to hefty electricity bills issued to the locals.

A few years ago, this sparked an anti-ECG demonstration that led to the death of a teenager.

In recent weeks, however, the two youth groups have been trading words over ECG’s presence in the area.

While the United Krobo Foundation held a demonstration at which its members insisted ECG leave the area, the Coalition of Krobo Youth disagreed.

As part of efforts to defuse the rising tension in the area, the Inspector-General of Police, Dr George Akuffo Dampare, and his lieutenants visited Odumase Krobo and had talks with the paramount chiefs of Yilo and Manya Krobo traditional areas, Nene Oklepeme Nuer Annobaa Sasraku II and Nene Sakite II, respectively; and later met the two youth groups on Friday, 10 December 2021.

He urged the youth to be of good behaviour but served a stern warning to those fomenting trouble among them.

“And, there, we have told God that for such people, when they come and they are wicked, they should put them in prison for them to wait for us so that when we finish all the work here before He has to call us, they’ll still be in prison; when we go, there’ll be judges there who have gone there before, there’ll be prosecutors there who have gone there before, there’ll be retired prisoner officers who have also been there; so all the systems are in place, so, we’ll go and take that person too from the jail and put him before the court before police prosecutors will be there and we jail the person again and we throw the person into perpetual cells.

There’s no hardship, complaining Ghanaians are living above their means – Northern Regional Minister