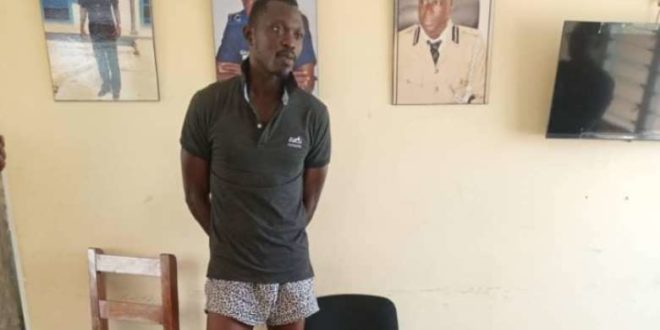 A 23-year-old man, Samuel Sarpong who has allegedly been defrauding unsuspecting victims of huge sums of money is in the custody of the Esiama Divisional Police Command in the Ellembelle District of the Western Region.

According to the police, many victims have paid huge sums of money to the fraudster with the hope of being given employment.

A police source indicated that the suspect uses names like Lawyer King and Esther Afia Abankwa on Facebook to advertise jobs to persons desperately searching for employment opportunities.

It was gathered that many ladies in search of jobs mostly fall victim to his dubious plans.

The source mentioned that the suspect was arrested after he lured a lady from Nkawkaw in the Eastern Region to the Ellembelle area on Sunday, June 5.

He deceived the lady into believing that he would help her continue her education.

She was also assured she would get an opportunity to work in a company run by the suspect.

The lady then travelled from Nkawkaw to the Western Region, only for the suspect to dupe her and absconded with her cash and handbag containing her valuables.

Samuel Sarpong disguised himself as a taxi driver and went to pick up the lady.

He later managed to secure the lady’s mobile money pin code, which he used to withdraw about GH¢1000 from her account on the night she arrived in the town and absconded.

After the incident, the lady reported the case to the police who launched a manhunt to arrest the suspect and was subsequently arrested.

ASP Kofi Darko, Divisional Police Commander in the area confirmed the story and said the police retrieved some items including a mobile phone and voters’ identification cards among others on him.

He advised the youth, especially ladies, to use legitimate ways to seek job offers and not rely on anyone they meet on social media.

He assured that the investigation will be expanded and all the victims will get justice.

Previous I’m a monkey if I give my Ghc1 to build National Cathedral — Kumchacha
Next Capitol riot hearing: Trump accused of ‘attempted coup’