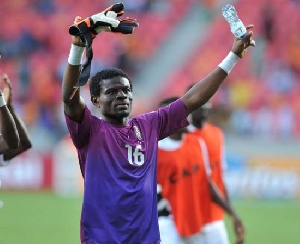 Ghanaian Sports Journalist, Saddick Adams, upon seeing Kawashima in the line up tweeted ‘Eiji Kawashima has been Japan’s first-choice goalkeeper for 12 solid years.’

The post saw a comment by Dauda who shared an image of Kawashima’s jersey he got after a friendly in 2013.

“Wow, I remember I swapped shirts with him in 2013, when Black stars played a test game in Tokyo with Japan. #legendgolie,” Dauda’s reacted to Adams’ post.

The Blue Samurai hammered the Black Stars 4-1 to progress to the finals of the four nations tournament.

Jordan Ayew got the consolation for Ghana in the heavy defeat while, Miki Yamane, Kaoru Mitoma, Takefusa Kubo, and Daizen Maeda were on the scoresheet for Japan.

Ghana will now battle with Chile for bronze while Japan face Tunisia in the final on June 14, 2022.