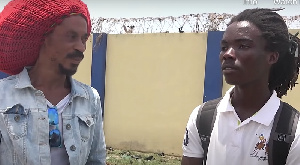 The father of one of the boys at the center of the Achimota School case where some boys were being prevented from being admitted in the school because of their dreadlocks, has made startling, yet disturbing revelations about his son.

Tyrone Iras Marghuy, one of the boys whose brilliance won the admiration of many when their case flooded the internet in 2021, has been described by his father as a disrespectful child.

In a video shared by @metrotvgh on Twitter, it showed the father, Tereo Marghuy, displaying a bloodied hand, speaking about how he got the blisters.

According to him, it was caused by Tyrone, after he confronted him for spoiling his sister’s tablet.

“This is what Tyrone has done to my hands. He spoilt his sister’s tablet and they were supposed to take it to the repairer this morning. The sister came to tell me they were taking the laptop to the repairer and I said yes, alright then.

“I went to see them in the room and I asked them why and she said, ‘Well, Tyrone is not ready.’ ‘Why are you not ready?’ Long story short, they had an argument. So, I went back there to ask him why then he just unpluck the laptop and start walking over me, and he’s been doing this all these years,” he said while still displaying his bloodied hand.

Tereo continued that Tyrone’s mother, who he blamed for always shielding him, has contributed to how the boy has turned out. “… which of course, his mother tolerates. She even asked me one time, why is it that I don’t want anybody to have peace in this house? When my son does something wrong and I’m telling him, she is giving me bullsh*t,” he added.

He also explained that this is not a behaviour that is new to his son, adding that he was not quite even in support of his son when the whole Achimota School admissions were going on.

“Even before the Achimota case, he was so arrogant, so I wasn’t even ready to follow him anywhere. I went to the court with him and defended him just for the sake of humanity; for the sake of Rasta. If it had only been because of this boy, I wouldn’t have gone.

“And this is the third time something like this is happening,” he said.

Previous Santa Maria residents in fear after mysterious explosion
Next VIDEO: Gyakie and Black Sherif have been buried – Blakk Rasta