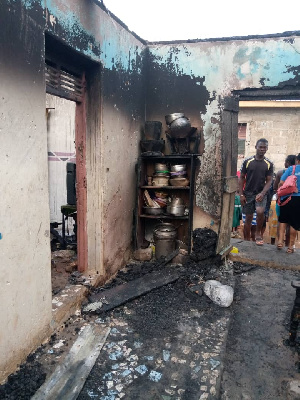 A fire Outbreak that occurred at Tikrom in the Ejisu Municipality in the Ashanti region has killed a three-year-old girl, identified as Patience Ohemaa Kwaw

The fire which started around 1:30am on Tuesday, razed down a 21 bedroom house completely.

Stella Oduro, the Assembly Woman for the Tikrom electoral area speaking to GhanaWeb said the young girl was burnt beyond recognition.

She said the cause of the fire is still not known as fire personnel have commenced investigation into it.

“I have been shocked by this unfortunate incident. I can say that properties worth millions have been lost through this outbreak. We’ve also lost an innocent girl,” she sadly revealed.

Portia Amoah, mother of the child speaking to GhanaWeb sadly revealed that Patience who happens to be the last born of her two children went to hide under a bed without her knowledge when the smoke had taken over the entire place.

“We suddenly saw smoke all over the room at around 1:30am. I however woke my two children up so that we could quickly run outside. Whilst we were almost outside, I could see that Patience was not with us. We could not find my daughter even after a long search for her, and by the time we realized she was still inside the room, the fire had already taken place in a severe manner. I still feel it like a dream whenever I remember how my three(3) year old daughter was caught up by the fire”. She soberly recounted.

Portia Amoah revealed that the firstborn who is five(5) years is the only hope currently left for her.