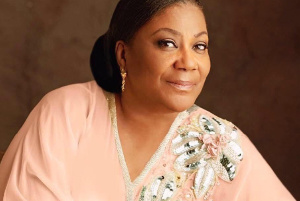 First Lady, Mrs Rebecca Akufo-Addo, has eulogized the Asantehemaa, Nana Konadu Yiadom III, for her selfless leadership and wise counsels, which have reinforced the image of the chieftaincy institution.

She said the Asantehemaa’s strong advocacy role for the empowerment of women and children and generosity had been greatly demonstrated in her kind gestures and donations to many sick women and children in various hospitals across the country since she ascended the stool.

“Your wise counsel and active role have also paved the way for the construction of the second phase of the Kumasi Central Market Redevelopment Project, a project meant to provide a decent environment for traders, especially women, to carry out their businesses,” Mrs Akufo-Addo stated.

Mrs Akufo-Addo was speaking at a durbar in Kumasi to climax the 5th- anniversary celebration of the enstoolment of Nana Konadu Yiadom III, as the 14th queen mother of the Asante Kingdom.

Nana Konadu Yiadom is the direct blood brother of Otumfuo Osei Tutu II, the Asantehene, who also sat in state at the durbar.

It was a festival of tradition, culture and customs, as people from all walks of life gathered at the Dwabrem at the Manhyia Palace in their beautiful Kente and other traditional costumes to celebrate the queen mother.

The ceremony coincided with ‘Awukudae’ one of the sacred days of the Asante people, which is used to recognize the ancestors, shrines and gods through the pouring of libations and other traditional rituals to seek their blessings and protection for the people.

Mrs Akufo-Addo emphasized that Nana Konadu Yiadom III, through her leadership style, had set a good example for other queen mothers and women leaders across the country.

“Queen mothers have been involved in educating and providing skills training in the areas of technical and vocational training and Information Communication and Technology (ICT) for women and girls in their various communities,” she added.

The First Lady, who highlighted some of the roles of queen mothers in the contemporary world, said they had helped in the proper upbringing of children through the inculcation of good traditional and moral values in children at the tender age while supporting the quality health care delivery of women and children in their communities.

Additionally, most queen mothers were facilitating access to safe drinking water and good sanitation for the people in their communities.

Mrs Akuffo-Addo appealed to queen mothers and other women in leadership positions to continue to demonstrate courage and execute their duties in a way that would make a meaningful impact on their communities.

She wished Nana Konadu Yiadom III many more years of impact-filled reign and urged the people of Asanteman to support queen mothers to help them achieve their traditional mandates.

Previous Ignore Nonentity Abronye DC; He Is A Loose Talker – NDC MP
Next NAGRAT strike looms over deletion of names of teachers from payroll