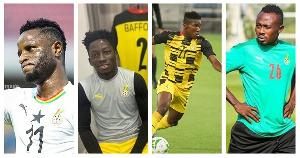 Speculations point to the submission of a Black Stars squad for the Nigeria game to the management committee of the team by coach Otto Addo.

A meeting between the Management Committee and the Technical team will be held today during which the squad for the doubleheader will be presented to the committee.

The squad is most likely to feature majority of the players who played at the 2021 Africa Cup of Nations.

As the nation waits the official announcement of the team that will be charged with the responsibility of taking Ghana to the 2022 World Cup, GhanaWeb points out five players who made the AFCON but are most likely to be left out of the Nigeria tie.

Mubarak Wakaso was a surprise package in Ghana’s squad for the 2021 AFCON. Wakaso’s commitment to the team cannot be questioned but why and how do you take an injured player to the AFCON?

Post-AFCON, Wakaso is yet to recover from the injury. His selection to the tournament was purely based on sentiment as he has not featured for any club for September when he picked up that injury.

With the fury over the AFCON disappointment still raging, it is unlikely that Wakaso would be involved in the games against Nigeria.

That GFA President, Kurt Okraku had to defend him after AFCON tells a lot about the doubts regarding Baffour’s entry to the Black Stars.

The revelation that the coaches could not count on him to be a descent replacement to Andy Yiadom after he got injured in the game against Gabon has done him no favors.

The youngster joined Rio Ave prior to the AFCON and it is unlikely he will be called.

The Great Olympics forward was in fantastic shape prior to the AFCON and was deservedly handed a place in the squad.

Much to the disappointment of many Ghanaians, Abbey Quaye was given no chance to prove his mettle during the tournament despite Ghana lacking goals.

His form post the tournament has not been great so we do not expect him to make the squad.

Nurudeen Manaf was one of four goalkeeper Ghana sent to the tournament. He was the third choice for coach Milovan Rajevac’s side.

Unlike the AFCON where Ghana went with four goalies, coach Otto Addo is expected to pick at most three goalkeepers.

Hearts of Oak goalie, Richard Attah who was the fourth choice for country at the tournament has worked up his way up with his performance for Hearts of Oak.

Manaf is likely to be sacrificed for the in-form Ati Zigi who some believe should keep the post.

One of five local players who rightfully earned call-up to the Black Stars for the tournament in Cameroon, Abagna possesses the quality to play for the team.

The current form of the RTU player however will not validate any decision to select him. He got injured during the tournament and has not recovered yet.

He will certainly not make the team for the upcoming matches.