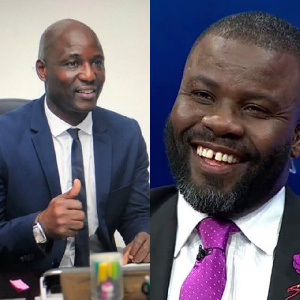 While many footballers start a career path into coaching right after retirement, others head into football administration.

Samuel Eto’o was the talk of the weekend after he was elected President of the Cameroonian Football Federation.

Following Eto’o’s major leap in his administrative career, we take a look at five Ghanaian football stars who could become Ghana FA president in the near future.

Samuel Osei Kuffour is regarded as one of Ghana’s greatest exports. He won the UEFA Champions League with Bayern Munich in 2001. He spent 11 years with the German giant, winning 6 Bundesliga titles, 4 DFB-Pokal titles and 1 intercontinental cup- his goal won Bayern the trophy.

For Ghana, he appeared 54 times for the Black Stars. Kuffour was part of the squad that secured Ghana first-ever qualification to the World Cup finals in 2006.

Kuffour after retirement has worked as a pundit for Super Sports. He was linked to Asante Kotoko’s vacant CEO job in 2020. Currently, has been appointed as the president of the Professional Footballers Association of Ghana(PFAG). Sammy Kuffour was a member of the Normalization Committee.

Anthony Baffoe was the first Ghanaian player born abroad to earn a Black Stars call up. The defender was based in Germany, where he spent the majority of his career. He represented Ghana at the 1992 and 1994 AFCONs. He won was capped 25 times.

Following his retirement, he has served FIFA and CAF on numerous occasions and also landed several ambassadorial roles.

He has also served GFA as the Director for International Relations for the Ghana national football team.

PFAG came into existence through him, where he decided to set up a body that will serve the interest of professional footballers in Ghana.

Abedi Ayew Pele, ‘the maestro’ as he is popularly regarded. Abedi gave it all both in the National Team shirt and in club football.

He was a member of Ghana’s squad that won the countries last AFCON in 1982. won many individual awards, which includes, 3 African footballers of the year awards, placed 9th in FIFA Players of the year award in 1992, having grabbed a nomination the previous year.

He has served on the FIFA football committee board, player status committee of both CAF and FIFA. He owns Nania FC, a third-tier tide in Ghana. In 2006, Abedi was named the spokesperson for South Africa in their bid to host the world cup in 2010.

Tetteh Zutah is the only current footballer on the list. He is the captain of Ghana Premier League side, Medeama SC. Coupled with his captaincy, Zutah is the administrative manager for Medeama.

Despite still being on the field, he is the vice president of PFAG, second in command to Samuel Osei Kuffour.

Yusif Chibsah, former Asante Kotoko player, has 13 caps for the Black Stars. In total, he played over 50 games for the National Team from the Under-17 level to the senior team. He captained Black Meteors in 2003 and also Ghana’s led the team at the Olympics games in 2004.

After his retirement, he has held the General Secretary position at the Professional Footballers Association of Ghana(PFAG). He is also into player agency and thus owns Club Consult Africa- a football agency.