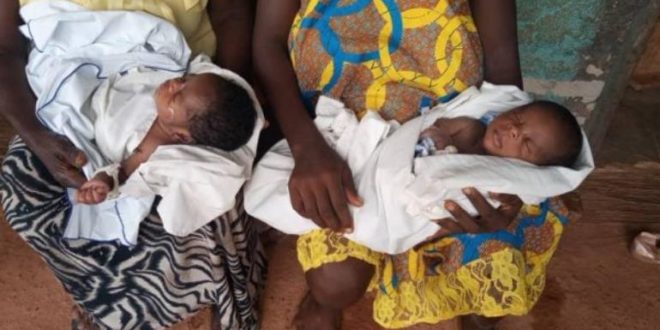 The Sefwi-Wiawso Divisional Police Command has picked up five persons for allegedly stealing two-week old twin babies at Punikrom in the Waiwso Municipality of the Western North Region.

Confirming the arrest to the Ghana News Agency (GNA),, Deputy Superintendent of Police (DSP) Christopher Dzakel, Waiwso Divisional Commander said, four of the suspects were arrested earlier but Kofi Nkrumah who was then at large was later arrested.

According to him, his outfit had intelligence on the 14th of March 2021 that, Paulina Owusu from Sefwi-Boako under his jurisdiction had contracted four men to steal a baby for her and that she had rented an apartment for them.

He said he quickly organized his men to rush to the said place since he did not want anything to happen to the babies.

The Commander said the suspects were subsequently arrested and upon interrogation confirmed that Paulina Owusu contracted them to steal the babies for her.

DSP Dzakel said the five were sent to the Waiwso magistrate court where they were remanded into Police custody to reappear on Monday 29 March 2021.

Abena Owusuaa,mother of the twins in an interview with the Ghana News Agency (GNA)said the prime suspect (Paulina Owusu) came to her house pretending to sell meat to her only to arrange to steal her babies.

She disclosed that one of the babies had a challenge in one of the legs and was referred to the Komfo Anokye Teaching Hospital in Kumasi for treatment, but due to financial difficulties she has not been able to do so.

Previous My husband divorced me because he said my private part is too ‘hot’ for his taste
Next VIDEO: How Kiki Banson predicted Burna Boy’s Grammy victory 12 years ago